“Life goes on,” says Rufo Chacón, the kid that the Maduro regime left blind, when he returned to Venezuela after being operated on

Upon his arrival in Venezuela with his ocular prostheses and the artificial intelligence system that were placed in Barcelona, ​​Spain, with the support of the Frigilux Foundation, Rufo Chacón assured that we must continue fighting for a future and for a fair ideal, since “life goes on”.

The young man from Tachira said that “he feels good, happy, I’ve already returned to my country again. It was a good experience in Spain, I had good care from Dr. Miguel Salinas from Ocular Lab, who made the prostheses that I currently wear. It was a daily consultation and tests of the prostheses to measure if they fit well in the eye socket. Life goes on, we have to keep fighting for a future, for a just ideal”, reported Noticiero Digital.

He added that the system that he now has, thanks to the Frigilux Foundation, is a support that will help him read, tell the time and identify the people around him, as long as they have already been recorded before. “It’s like a help to make my life a little more efficient,” he said.
Rufo affirmed that he now plans to study history, Spanish and music, as he intends to educate his vocabulary and his way of speaking, “because I intend to sing. I would like to be a poet, “he said, noting:” My source of inspiration is that I’m still alive, I’m still fighting. ”
“I hope to see again, although today it is impossible, but faith moves mountains,” said Rufo, who upon arriving in the country, wore the national tricolor flag as a cape.

With Rufo and his mother was the treating physician, Dr. Miguel Salinas, who will be in Venezuela until Wednesday to see the development of the young man who was left blind due to the repression exercised by the security forces of the Nicolás Maduro regime, during protests in the town of Táriba due to the shortage of domestic gas. The policemen fired their weapons against the protesting population and Rufo Chácón was hit in his face by multiple pellets, several of which were embedded in his eyes, causing him to lose his vision.

Rufo’s case for us is very special because it goes beyond the purely professional and there is a vital human part that has made us invest not 100% in his case, but 200 or more, I would say, because he is a great boy and his mom too. All the people of Frigilux have accompanied them and made everything easier for us at all times, and the truth is that it has been a pleasure to be able to work with them, and achieve the results we expected, ”Salinas told reporters at the Simón Bolívar International Airport of Maiquetía.

He considered that they have to wait a while to gauge the evolution, because Rufo spent four months without wearing a prosthesis, so they had to do a very fast job to be able to shape the eye socket and adapt the prosthesis, “and in parallel, we have started his adaptation phase with the training of the artificial intelligence system ”.

“I’m going to be with Rufo until Wednesday to check that everything is going well and that he doesn’t have any discomfort because the process was very time compressed and I’ve come here with him in case any anomality arises and to keep an eye on him(…) We have our laboratory in Barcelona and it is difficult to travel, but we have already spoken to Adriana and Rufo and they already know that they will always have our support. It’s unquestionable” he said.

“We will never abandon the Rufo case”
Meanwhile, the national director of Marketing and Communications of Frigilux, Oswaldo Malpica, who accompanied Rufo and his mother throughout the trip, affirmed that the foundation will never abandon Rufo’s case and that they are willing to collaborate with everything that science contributes to improve the quality of life of young people.

“We are never going to abandon Rufo’s case, one of the most important things is that Rufo even wears two pairs of prostheses, the ones he has in place and some additional ones that project a little growth in his eye socket, this obviously for a limited period of time until his ocular cavity is the definitive one (…) we are studying some alternatives, metal rods with geolocators, we are ready to support him in everything that science in some way can contribute to improving the quality of his life, ”said Malpica.

He assured that the most appropriate solution was achieved with respect to what science currently offers. “The issue of prosthetics is that the best place in the world to make semi-functional prostheses with Rufo’s characteristics, is only in the hands of the people of Ocular Lab and Dr. Salinas, who very kindly attended the case with great care” he added. “We are very pleased with the results that we have obtained with Rufo, from the first moment when Mrs. Adriana turned to us in search of a solution that could be found in Rufo’s particular case, we immediately attended to him. The foundation focuses on the issue of helping children´s health although Rufo did not completely fit that category, and obviously his cause was different. We immediately established an action plan together with Dr. Pastrana and Dr. Álvaro Castellanos, at the hands of Mr. Yaser Dagga, who was very aware from the beginning and the truth is that every day he called us at least four times to see which was the scope of the case, “he said.

She announced the case of a girl with a transplant currently being worked on in Spain, which shows that “we are silently advancing (…) we do our work with the support and affection of the foundation.” 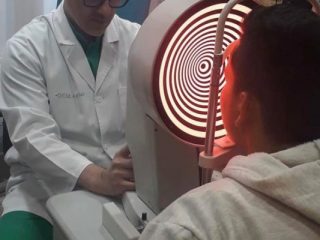 Any cookies that may not be particularly necessary for the website to function and is used specifically to collect user personal data via analytics, ads, other embedded contents are termed as non-necessary cookies. It is mandatory to procure user consent prior to running these cookies on your website.

Click one of our representatives below to chat on WhatsApp or send us an email to info@ocularlab.es

1. INFORMATION FOR THE USER

End of treatment: maintain a commercial relationship with the User. The operations planned to carry out the treatment are:

Data conservation criteria: they will be kept as long as there is a mutual interest to maintain the end of the treatment and when it is no longer necessary for that purpose, they will be suppressed with adequate security measures to guarantee the pseudonymisation of the data or the total destruction of the data.

Communication of the data: The data will not be communicated to third parties, except legal obligation.

Rights that assist the User::

2. OBLIGATORY OR OPTIONAL NATURE OF THE INFORMATION PROVIDED BY THE USER

By ticking the corresponding boxes and entering data in the fields, marked with an asterisk (*) in the contact form or presented in download forms users expressly and freely accept that their data is necessary to meet their request, to the provider, the inclusion of data in the remaining fields being voluntary. The User guarantees that the personal data provided to the OWNER is true and is responsible for communicating any modification.
The OWNER expressly informs and guarantees users that their personal data will not be transferred in any case to third parties, and that whenever any type of transfer of personal data is made, the scpecifical, informed and unequivocal consent of the Users will be requested in advance. All the data requested through the website is mandatory, since it is necessary for the provision of an optimal service to the User. In the event that all the data is not provided, it is not guaranteed that the information and services provided will be completely adjusted to your needs.

That in accordance with the provisions of current regulations on personal data protection, the OWNER is complying with GDPR regulations for the processing of personal data under its responsibility, and according to the principles described in article 5 of the GDPR, for which they are treated in a lawful, loyal and transparent manner in relation to the interested party and adequate, pertinent and limited to what is necessary in relation to the purposes for which they are treated.
The OWNER guarantees that it has implemented appropriate technical and organizational policies to apply the security measures established by the GDPR in order to protect the rights and freedom of Users and has communicated the appropriate information so that they can exercise them.